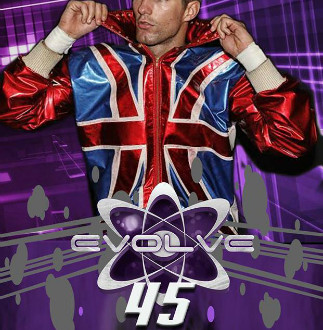 Evolve 45 came rolling into little Ybor City, Florida last night at the crumbling but loveable Orpheum theater. I can summarize the experience simply: awestruck. The talent level on the Evolve roster is incredible.  This is like having Ring of Honor in my backyard.  If you want some more effusive praise read below:

1. FIP Champion Caleb Konley w/The Premier Athlete Brand def. Gary Jay.  While Gary Jay took the loss to a terrific moonsault by new champ Konley; he was still the star of the match.  Something about his skinny, blindingly, white body shouldn’t work;  but it does, as he combines amazing high flying moves with sheer strength. At one point Jay went flying over the top ropes onto Konley and the front row just as the overhead lighting sparked off; leaving the crowd with a flashbulb image of Jay’s lanky body soaring through the air. Honestly, who turned the lights off; Jay did!

2. Trent Barreta w/The Premier Athlete Brand def. Rich Swann w/Su Yung.  So Cal Val’s PAB was dominate last night and the “oh so pretty” Barreta put on quite the match with Mr. All Night Long.  I love watching Rich Swann’s kicks which he can do from seemingly every angle and body positioning, whether it’s on the ropes, his back, to the mid section, head…everywhere.  Lesson: Don’t get anywhere near Swann’s legs or you will be severely kicked.  In the end, even with the help of Pika-Su, Barreta’s DDT proved to be too much.  Amazing match and of course what people have come to expect from these two terrific wrestlers.

3. Andrew Everett def. Anthony Nese w/The Premier Athlete Brand.  Finally, So Cal Val and Andrea were left angry and hopping mad after Nese’s loss.  Andrew Everett had to pull out every move in his impressive arsenal to overcome his seemingly damaged knee and a ready to capitalize Nese. My favorite moment was Nese’s one armed power bomb and Everett’s nifty reversal.  Wow and wow!  In the end the knee was mighty and Everett squashed Nese with the dangerous shooting star press.  Everett then of course uses male pride and ego to manipulate Konley into a title match.  Stay tuned Evolve fans: We’ll see if Konley’s ego is as mighty as Everett’s knee.

4. Chris Hero def. Trevor Lee.  The night could have ended after this match and I would still have been satisfied.  Trevor Lee and Chris Hero pulled out the Mauy Thai play book for this one with beautiful low kicks, rib kicks, flying knees and spinning elbows.  The master of the deadly elbow wins, because you can’t beat Chris Hero at his own game!

5. Zack Sabre Jr. def. Roderick Strong.  The crowd went dead silent several times during this match because, as my husband said to me, this was like watching a moving work of art.  Out goes the Mauy Thai and in comes the BJJ, and a tremendous series of limb manipulations, joint locks, chokes and controls.  Roderick Strong was tremendous jumping out of the ring to recover and regroup from the technical beat downs of Sabre.  The dual chanting and frantic shouts of “both these guys” doesn’t even capture the admiration these two engendered in the audience last night.  I think this is the best wrestling match I’ve ever seen.

6. Timothy Thatcher def. EVOLVE & DGUSA Champion Drew Galloway to win the titles. Sad but true: this was the ‘worst’ match of the night despite Galloway laying both of his titles on the line.  The stakes were high, but honestly no one could follow Strong/Sabre…and Galloway admitted as much to the crowd.  Also, this match was slow and somewhat sloppy featuring some headbutts, a few suplexes and some drop kicks. I guess the style just wasn’t too my liking as it was more of a WWE type affair (with lots of kayfabe talking rather than actual wrestling).

I can say, however, I’m likely in the minority, as the crowd seemed truly shocked following the surprise win by Thatcher, showering him with enthusiastic rounds of “you deserve it!”.  One Finn Balor clad fan actually looked teary-eyed to me, so I guess this match worked for most… just not me.

After the show; your usual lines of fan queued up to meet Sabre and company at the merch table. Trying to avoid the lines, my husband and I accidently ran into the over 6 feet tall Andrea, who looks like a super model out of her wrestling attire.  She looked so different in her street clothes, my husband and I almost weren’t sure who she was at first.  This is a very interesting complex woman who has had to battle through some dangerous health conditions to be the physical force she is today.  Needless to say, she’s beautiful on the inside and out and a great entertainer.  Can’t wait to see her in her in full on heel form in a few weeks at Shine.