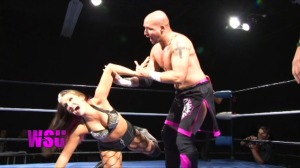 In all this talk of women’s ‘revolutions,’ racist tweets, sex tapes, league mergers, developmental by name only, it’s no wonder the world of professional wrestling can seem a bit more serious than it’s intended.

This is not to imply professional wrestling isn’t a serious business, however. Athletes literally put their lives at stake with every match, talent invest their very livelihood on a future more uncertain than a professional sports franchise in South Florida.

Through this site, I’ve gotten to know to a fair amount of the pro wrestling community. To a tee, these individuals confess to waiting for the opportune moment to reach for the brass ring…when someone higher up catches a glimpse. The wake up each day hoping for this spotlight.

But there’s a catch. No one wants to be the New York Knicks with Michael Jordan still around. Meaning, too much of a gender, body type, wrestling style, age bracket, gimmick, heel/face….can stall a career for literally a half decade or more. See, getting noticed is contingent on those needing to notice requiring said individual. Let alone league politics where the dilemma of saying goodbye to older talent is never easy (based on both marketability and loyalty). Thus why Sting never held the WWE Heavyweight Title. It’s winning the lottery…twice.

The solution, however, is staring at use right in the face: inter-gender tag teams, stables and accompanying belts. First step: discard the rules of these matchups. We have to accept women will get hit, man monsters will have to adjust wrestling styles in tandem.

A cry for inter-gender matches doesn’t equate to political correctness. The exact opposite, in fact. It empowers pro wrestlers waiting for the proverbial perfect timing, ‘get noticed’ opportunity to go around this roadblock. Individuals are no longer staffing based on a marketing niche with gender as foundational requirement. Instead, they’re seeing an array of new match styles, rivalries, blurred lines between heels and faces, and unprecedented true mic work beyond valet fanfare. It’s also a comfortable way to infuse sexuality into plotlines. Lord knows this is the white elephant in the room. Ditto for racial stereotypes.

Lucha Underground, of course, took the inter-gender brave leap…and to perfection…in Season One. As Sexy Star and Ivelisse became essential parts of its storylines, rivalries naturally emerged. The Trios Championship now had merit. Vampiro needed to get involved. Catrina’s very presence was a plot twist. In Ring of Honor, the House of Truth now has a female member (Taeler Hendrix).

Ring that bell, ref. We have a better pro wrestling world right at our corner turnbuckle.