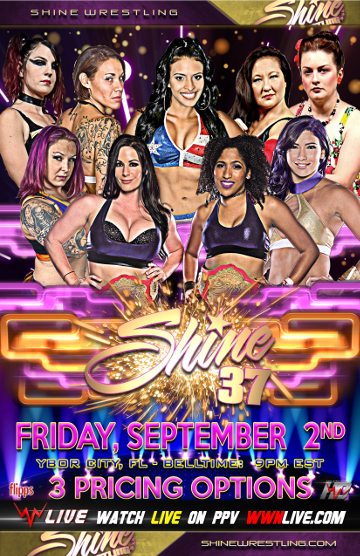 Disclaimer: this is not in order by any means. Rather stream of consciousness.

First things first: I’m admittedly a bit shocked this event happened, period. Hurricane Hermine had just said ‘howdy’ less than twelve hours earlier, and was still roaring its way up the East Coast. As could be expected, some of the talent and likely fans couldn’t make the event…to include Allysin Kay, set to battle Ivelisse for the Shine Championship. We were so disappointed to hear her stranded (but thankfully OK), Huracanrana needed a last minute wardrobe change of t-shirt (as she was proudly representing AK47).

Marti Belle somehow pulled off the Hermine miracle in making it literally just in time for the tag team championship match. Which…also didn’t go as planned. More on both below.

WWN lynchpin Trevin Adams did his best to both stall and make sense of the adjusted card…and confessed both to the fans. Knowing Adams well (we adore both Shine and Full Impact Pro), no one in the business is more dedicated to what he does. Ditto for the WWN posse’ of Kid Cadet, David Puente, Brandon Asahina, and referee Frank Gastineau. How this event started on time and stayed together (noting weather) was no small feat.

When you need something done, do it LuFisto. She stepped up to repair the damaged card, and did what she does best: be incredible. She challenged Adams, WWN, Ivelisse, and the locker room to giver her a long overdue Shine title shot. And she got it…followed by a crazy locker room spillage into the ring. Challenge accepted! Note we’re only five minutes in at this stage.

Dominique Fabiano and Priscilla Kelly proved once more how much great, young talent there is out there in women’s wrestling. Both are excellent athletes and characters, and put on a solid Shine debut, opening match. So much so, they got the nod to fill in the tag team championship match void against Belle and Jayme Jameson. I couldn’t even imagine the butterflies by Fabiano and Kelly at this news, and kudos to WWN for having the courage to do it.

Belle and Jaymeson certainly made them earn it. As most know, pro wrestling moves look real because many ARE real. Jaymeson gave Kelly a solid display of her strength, and – to Kelly’s credit – took it and then some. (I hurt just watching the ring bumps.) Then the challenge of keeping pace with Belle’s ring presence, tops in the business. Mission accomplished.

Luscious Latasha continued her accidental but proud undefeated streak, now 9-0 after a fun contest with another Shine newcomer in Layne Rosario. Huracanrana calls hometown girl Latasha “a true babyface,” one of the best in the business, period, at embracing the crowd throughout. Rosario’s debut was strong, a cool roller derby character that is certainly unique. Come back to Tampa, Derby Doll!

Rachell Ellering was, well, Rachel Ellering…which means affectious and ring savvy. It was Randi West, however, who arguably turned the most heads. West was a stellar bad guy and top-notch tactician, and perhaps the highlight of the entire event. That was, to me, perhaps the match of the night. It was perfect from start to finish.

Along these lines, I hope people at I Believe in Wrestling and Lady Warriors were watching hero Santana Garrett against TNA’s Raquel. If there was a prescription for perfect grappling and transitions, this was it. This match reminded me of beautifully entertaining Pro Wrestling Guerilla matches, ones where the crowd rises every 15 seconds to appreciate an excellent sequence. Wow!

Sorry Cena and Rusev, but you’ve got nothing on the absolute war between Thunderkitty and Malia Hosaka in an ‘I Quit’ match. The term ‘underrated’ reaches new heights with these two. Both are incredible personalities, tough as nails, and will go to no end to prove their mettle. German suplexes onto bar floors and choking with a microphone cord were not enough. Minutes of forcing someone’s head through a chair seat powered by full body force choke…finally did it…almost 20(!) minutes later. Thunderkitty’s got nine lives, it seems.

Su Yung versus Vanessa Kraven was promised by Asahina as something not to be missed, and it lived up to the billing. Yung and Kraven are superstars in the women’s wrestling community, with every appearance special. They are extraordinary athletes, let alone entertaining to the max. It should tell you something that the crowd never wanted the match to end.

Andrea’ versus Mercedes Martinez was the classic brawl we all know and love. It’s about time Andrea got her due, as she’s been a central part of the WWN and Florida women’s wrestling resurgence these past two years. More on her under a separate story (no spoilers!). Martinez is dynamic, fierce, and likely one of these people everyone loves to wrestle as a result. Mission accomplished once more. The two are slated for a Shine 38 war, in November.

Leva Bates is back!…and danced her way into yet another stellar match with Amber Gallows, Tracy Taylor and Kennadi Brink. For our money, we absolutely love heels, and Brink and fellow card member Stormie Lee are worth the price of admission alone. From the first time these latter two stepped into a Shine ring, they engendered endless boos from the crowd. And continue to create a chorus of hysterical jeers. They’re also two great ring artists. Love these ladies!

Combine LuFisto and Ivelisse for a main event, and end up with what you would expect: a match worthy of a PPV. Note again, this impromptu with Kay stranded at some godforsaken airport terminal. With likely zero preparation time, these ring generals put on a war. With no disrespect to Kay, I’m not really sure how the original plan could’ve topped this perfect piece of storytelling. It was raw physical, emotional, and standing ovation (several times) worthy. You could see the bruises through parts of ring gear. Again, friends: wrestling isn’t fake. Just the outcomes.

Kudos to LuFisto, as well, for finally telling a particularly irritating set of chanting fans – they literally didn’t stop for more than 10-15 seconds at a time, peak volume and often rude – to finally shut up. Much has been said about these types of fans, but I’ve only experienced them on television, never understanding the ire. Now I do. Think three hours of trying to watch great athletes…and ignore the distraction of those attempting the reverse. I hope venues start throwing them out as they do dangerous or inappropriate fans. Soapbox over.

Finally, the show ended with a pipe bomb that would bring tears of joy to C.M. Punk’s eyes. It was so meaningful to the industry, we’ll cover this in a separate story. In short (and sans spoilers), Andrea’, Gallows, Brink and LuFisto formed the ‘C4’ stable, and with it brought some much needed fact-dropping to fans and promotions. These were the perfect individuals to do it, as few would have the courage, savvy, and…well…smarts to pull it off.