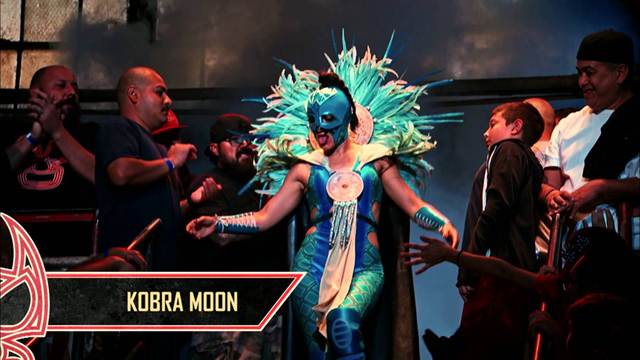 Big things are brewing for the raw and powerful luchadora, Kobra Moon, on Season 3 of Lucha Underground.

While she can’t reveal the details, I was lucky enough to interview wrestler Thunder Rosa, also known as ‘Kobra Moon,’ on her views on the use of mystical themes in the wrestling world.

Her answers are certainly going to make you realize, if you haven’t already, that Lucha Underground is must-see TV.

1) Who or what inspired the character of ‘Kobra Moon’?

KM: The character was created by the writers of Lucha Underground. After season 2, I traveled to Mexico City and I saw that the snake is one of the biggest symbols in Aztec history.

Kobra Moon is a very strong character, hungry for power and attention. I feel that for myself I am somewhat hungry; not for power but for success. There are a lot of characteristics of this character that are not necessarily me but she is such an interesting character and I can’t wait for you to see what’s coming for her.

2) Do you think that religion or spirituality plays a role in how you portray Kobra Moon and Thunder Rosa?

KM: Spirituality for Thunder Rosa more than for Kobra Moon. I have told the story many times about how my grandfather loved lucha libre, ironically he died while watching a live show about 50 years ago. I know that the spirit of my dead grandfather talked to me and definitely had something to do on how now I portrait a sugar skull. Sugar skulls are used for “Day of the Dead” and during this day, we remember those who passed away. Thus, every time I put that make up on I remember those who passed away and were an important part of my development.  For Kobra Moon, she is more driving about other motives that I can’t really answer because you guys have to watch the show!

3) It seems that snake like characters, whether in wrestling, movies or literature are often portrayed as masculine figures.  What do you think about Kobra Moon as a uniquely female serpent?

KM: I think it’s brilliant! As you have seen in LU,they are not afraid of using female figures as strong leaders. She is different because she is a mythical character, she is something out of this world. Again I would love to elaborate more but then I will be spoiling the fun.

4) How would you describe your character Thunder Rosa to a non-wrestling fan?

KM: She is a warrior, an underdog that is seeking for respect and to make her ancestors proud. Thunder Rosa can be sweet and nice, but she can also be vicious and cut throat to get what she wants.

5) What do you think about the use of spiritual or super-natural themes in wrestling?

KM: I think that is something different. I mean they did that with the undertaker and people love it. In the case of LU people are starting to accept the mythical characters more after they learn more about the stories behind the matches. I think because we are use to see the “normal character” on TV, it will take a little while for regular fans to get use to supernatural characters.
**********

So Why Kobra Moon, and why spirituality in wrestling?

Lucha libre, in my opinion, is where art and wrestling merge into one inseparable dance capable of representing Mexican culture while still being accessible to all people.

Lucha libre does this subtly by portraying complex human story lines through its use of costumes, masks, colors, and high speed action. Its no surprise that spirituality and supernatural themes are so easily interwoven into lucha libre, whereas other styles of wrestling tend to shy away from this territory afraid to take on these bombastic themes.

Lucha libre, on the other hand, has no problem bringing life, death, ghosts and transformation into their matches all without feeling forced or over-relying on pyrotechnic trickery.  While this might not be for everyone, I think the use of spirituality is part of the beauty of wrestling.

That ability to suspend our disbelief long enough to forget that we are all fragile, vulnerable and ephemeral.

Just for a moment we can become one with the masked  warrior, whether tecnico or rudo, and be transformed into a snake, a dragon, an angel or a saint. A touch of divinity or infinity; a chance to be part of something bigger than ourselves.

Where Kobra Moon ends or begins this season of Lucha Underground remains to be seen. But I know myself and the other believers will gladly take that journey with her.