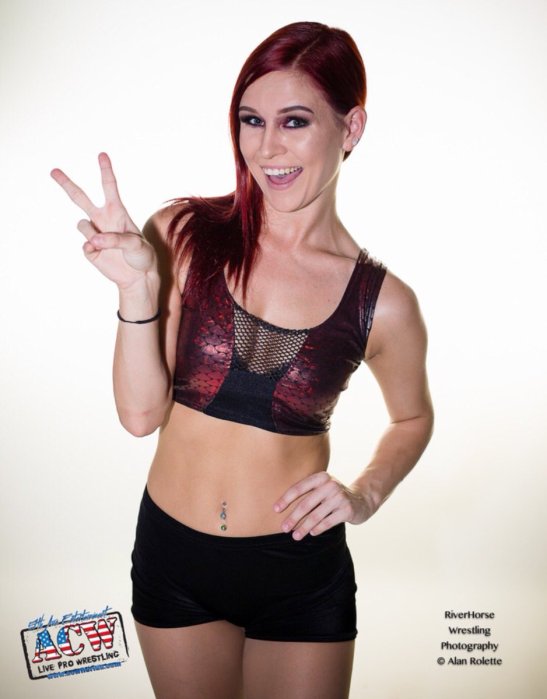 It seems hard to fathom that (if Cagematch is preaching gospel) Huracanrana and I witnessed Aria Blake’s very first professional match. This surprisingly entertaining dark match at Shine 30 in Ybor City featured Blake squaring off a very game Aspyn Rose.

Over the next couple years, and seemingly everywhere we went in the Tampa/Orlando wrestling scene, there was Aria Blake. American Combat Wrestling (ACW), I Believe in Wrestling, Ronin, and the aforementioned Shine. This was, of course, for very good reason. The Jay Lethal trained neophyte is a stellar performer at only 23 years old, capable of equal character development to fit a desired storyline and situation.

Perhaps the greatest asset of Blake is her consistency. While one of the busiest indy wrestlers in the West/Central Florida scene, it’s near impossible to encounter a bad Blake match. What impressed me the most, however – even in her earliest matches – is Aria Blake’s ability to seamlessly adapt to her opponent.

Yes, Blake features a solid repertoire of grappling moves, head scissors, and outside the ring antics. She’s literally extraordinarily flexible, and uses it to her advantage. What Blake does better than most, however, is read a match’s ebb and flow, and adjust tactics accordingly. She’s importantly stellar at interacting with crowds, a terrific heel or face who knows how to push the right buttons in ways that always induces laughs. (I confess: I miss her cute albeit cliché Game of Thrones inspired character!)

Thus, I would venture to guess that – especially in ACW circles – Blake must be a locker room favorite. Her match history is filled with a slew of an equal young and established talents, individuals well aware that a showdown with Blake will be both entertaining and safe. She’s terrific at selling strikes and opponent ambition, the rarest of feats among younger pro wrestlers. Priscilla Kelly/Blake matches are always solid, ditto for ones with Mila Naniki. She’s also held her own very well against the likes of Su Yung, Leva Bates, plus when featured in fun and quirky tag teams. When in tag team environs, Blake is clearly having fun…and it shows.

In 2016, ACW made a very wise decision in having Aria Blake serve as a long-standing champion. The promotion was arguably going through a renaissance, with both its male and female performers – akin to Blake – jumping back/forth across the entire WWN lineup to include Shine, Full Impact Pro and also Evolve. In speaking with other show attendees, several of us noted how the very good ACW opening segment was on par with the advertised promotion that followed. Blake was always mentioned as a highlight.

Platinum Pro Wrestling’s current champion, I would expect Aria Blake to hold quite a few more belts in the near future. There are certain pro wrestlers with that ‘it’ factor; she’s clearly one of them…and it’s great to have her as a local.