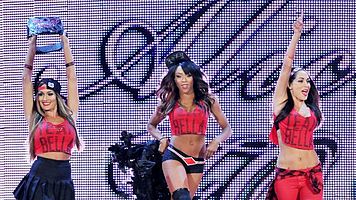 The WWE’s women division has not always been called “The Divas” division but it has embraced this moniker since 2008, and in my opinion much to the detriment of the talented female wrestlers this company employs. Language is important and the very usage of the word “diva” says a lot about what this division exposes.

Now for me, when I hear the world diva, I conjure up an image of the over the top, VH1 program from the 1990’s featuring arrogant but talented women trying to out sing each other. And in reality “diva” comes from the world of opera. But just ask anyone what the term means and how it is used and it is clearly pejorative in nature. In fact, the oxford dictionary defines a diva as a “self important, difficult to please person, typically a woman.” In short: a bitch. Therefore, the WWE created an entire division dedicated to one female archetype, the self important, arrogant bitch. And so forth they have followed this formula. There is really only one character allowed in the land of the divas; and that would be (surprise, surprise): a diva. Not a single female is allowed to be a likeable purely good soul; who fights for what is right or sticks up for her friends or principles. Of course the men are given this latitude because they are “superstars.” The women cat fight, steal each others’ men, our “friend-enemies,” make fun of each others’ clothing, and generally cheat, act like jerks and display almost every negative trait possible. They are billed as ‘strong and sexy” but act weak and craven.

So what’s in a name? I have to disagree with Shakespeare here; apparently a lot is in a name. Call a whole group of women divas and you are left with really just one character with no variation. The name itself tells the fans all they need to know about how the WWE views women’s wrestling. Instead of letting women be every character and archetype in the world and develop unique and interesting plot twists to fill our their move sets they are left with endlessly playing one character; and she is unlikeable, arrogant, jealous and ultimately boring.