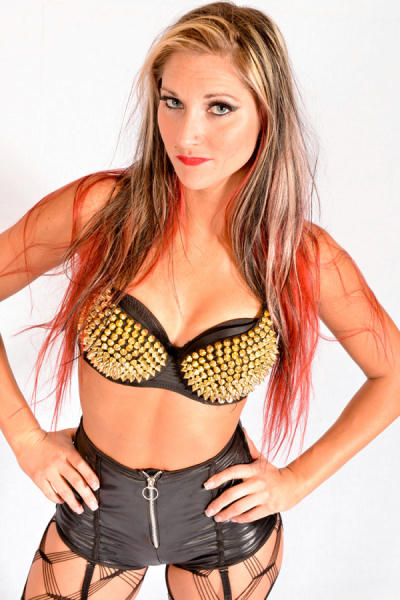 After missing what we heard what was a spectacular Shine 30, The Intercontinental Belt and I were back for Shine 31 at the Orpheum in Ybor City, Florida. A newfound union between Valkyrie and Valifornia paid BIG dividends tonight, sealing their fate as the now-dominant group in Shine. These ladies ripped apart their competition, showing once again: it’s good to be a heel!

Devyn Nicole, the beautiful babyface, displayed class right from the start. She offered her hand to an arrogant Rains…only to have it kicked away. This singular moment was a premonition for the how the whole night would go.

To explain: sportsmanship was a sign of weakness; no good deed would go unpunished! Nicole got in some nice offense with a few sweet neck breakers, but was done in by one of the greatest heel tactics in the game: a simple shove into the referee. (Why, stripes, why?!) This set Nicole up for a quick reversal by Rains, and a roll up loss. A fun match to start the night, one by two wrestlers I hope to see more of in Shine.

Right into it! Shine wasted no time taking us right into one of the most important matches of the night: a fatal four way for the next #1 contender. This match delivered as expected by these 4 amazing athletes. AK-47, despite looking injured (with an MMA-esque black eye) from the get-go, chased former stable mate Taylor Made around in circles before finally choking her into the corner.

In  tandem, Havok  struggled to manage the Bullet Babe, succumbing to several well-placed kicks and boots to the chest. Eventually, some clever teamwork by the two faces almost led to the match up we were all craving: how would AK-47 and Havok handle facing each other?!

Well, not well as it turns out! Both go back and forth, arguing over failed attempts to pin the Bullet Babe. And then: THE BLOOD BATH! Su Yung delivers the most devastating blow of all to the arguing faces, spraying them blind with her signature red mist. This devious interference allowed Taylor Made to quickly recover and roll up a rouge Kay. And this, friend, is why baby faces can’t win: too much hesitation!

Eventually, Havok and Kay work together to chase off the psychotic Su Yung…but only after the damage has been done. Later it’s revealed that Kay sustained an eye injury from Su’s assault. Man, Su what is in that mist? Wait…I don’t want to know!

Hosaka and Wine are such a pleasure to watch. Together, they hysterically harassed a poor older man in the front row, insisting to the ref this “pervert” was staring at their butts. Honestly. I think they made that fan’s night…or maybe month!

Bates and Yim? Another amazing(!) entrance this time as Jack Skellington and Sally Ragdoll from The Nightmare Before Christmas. My favorite move of the match, in a list of endlessly awesome moves, was Hosaka and Yim going back and forth in hanging each up in the rope tarantula. But the Lucha Sisters are a coordinated pair, and the combo move of Bates’ awesome super kick followed by Yim’s cannonball flattened Hosaka entirely.

And if that wasn’t enough, Thunderkitty’s idea of “helping” team Legendary put the nail in the coffin. Thunderkitty “accidently” hits her stable mates with a chair, leaving them defenseless. Leva with another deadly super kick, and Yim with a German suplex…and Hosaka fell to the pin. Then it’s celebration dance party by the Lucha Sisters, giving the babyfaces their first win of the night! Seriously no one loves her job more than Leva Bates, her energy simply infectious. Of course, Legendary are not in a celebratory mood, and chase Thunderkitty into the locker room with a chair invite. More on that later!

This match started with a Christmas present, a headless stuffed bear, and ended with another referee distraction and some quick thinking by Marti Bell. Lots of fast paced action here, including some stunning Samoan drops by Jameson and a quick ass spear to stunner combo by Solo. My favorite spot here was Bell’s super high bicycle kick to Lovelace, one eventually countered with a superb enzuigiri.

But just when it looks like the Buddy System might prevail, Val and Hunter’s non-stop distractions pay off, giving the wonderfully sneaky Bell a chance to capitalize. Bell with another great kick and a pedigree to Lovelace all behind Stripes’ back! Bell then carefully positions a mostly knocked out Jameson on top off Lovelace for the win.

Once again, heels play well together, and Bell was particularly amazing here, sacrificing her chance to get the pin for the sake of the team.

The classy throwback against the vivacious Latasha made for a fun bout. It’s incredible how strong both of these ladies are, proof positive as they threw each other all over the ring. Latasha and Thunderkitty were rocs stars in their grappling skills and power. Thunderkitty’s fireman carry to an arm bar was vicious!…but not to be outdone by Latasha’s block of Kitty’s claws into a sunset flip!

Thunderkitty, responsible for the only face win so far, wasn’t going to get through THIS match without any retribution. Karma is a bitch, indeed, as Legendary gave Kitty a taste of her own medicine. Not to mention ref Frankie Gastineau getting some Brandi Wine smooch action! Hosaka rolls Latasha on top off a thunderstruck Kitty, leaving the Luscious one defactor victor. But never fear Thunderkitty fans: she may have been beaten, but Kitty wasn’t done just yet!

I humbly declare this match of the night! What a terrific duel between a seemingly mismatched pair in both height and strength. The powerhouse Andre´a looked confident as usual, intimidating her opponent with flexing and push ups in between beat downs.

But honestly, what a performance by Rodriguez! The Peruvian Princess kept up with Andrea, move for move. Back and forth chokes and slams saw Andrea neglecting over and over again to cover her opponent; she was enjoying the beat down too much to care! But La Rosa Negra wasn’t having it. and she gave Rodriguez a little liquid courage to shift momentum.

Following her quick sip of Corona, Amanda stuns Andre´a with a DDT to bull dog combo, and then almost pins her from a missile drop kick off the ropes. Fortunately, Andre´a was grabbing the ropes. Andrea then finishes off the Peruvian Princess with an awesome Death Valley Driver. Fantastic, captivating match, and the only clean win of the night for the heels. Proving – once again – that Andre´a doesn’t really need much help, does she!

Being a Su Yung match, you know it’s going to get extreme…and indeed it was. But Su played with her victim a bit before crushing her head, and furthering the total domination of Valifornia-Valkyrie United.

A very capable Jessica James, who looked like an Aztec warrior, initially fell for Su’s mind games, but then confidently locked up. After a few teased attempts at a “test of strength,” Su almost decapitated James with a running knee. Outside-the-ring action was spectacular, with James attempting to regroup…but finding herself squashed by a senton from Su off the apron. My favorite part 0 other than Su’s stunning finisher combo – was a James stuck in the tree of woe, combined with a  look of pure devilish fun on Su’s face as she wails on with her kicks. As the Intercontinental Belt put it, “what crazy fun would it be, to be Su Yung in a ring beating down your worst enemy for 20 minutes?”

Lexie Fyfe added to the drama of this fun match-up, telling Legendary that they could not be ringside during the contest. This left poor Kai shaking like a leaf, in between her nicely executed deep knee bends. LVD and Kai ultimately worked a crazy fun match, reminding us why Kai is a legend but LVD is the future. Big ups to Leilani Kai, she definitely still has it!

In the background, Thunderkitty came out to surprise attack Legendary as they were helping Kai from the ring. Kitty’s got claws(!), and a taste for vengeance!

It was great to see Thunderkitty getting a larger role in Shine. I’m excited to see her take on both members of Legendary in the future.

The end has finally come for the Lucha Sisters, as had been foreshadowed since  Shine 28. Despite looking coordinated and in synch during their prior match, Bates and Yim simply couldn’t get on the same page. This one had some great kayfabe and mishaps, giving Better Than You the opening they needed to become champions.

This match featured great back and forth wrestling, a moveset that really showed off the skills of all four wrestlers. My favorite part was Yim goes for a late match piledriver, only to be  blocked and scooped up by Jameson into a Samoan drop. This set up ‘hot tag’ Bates, leading to the Yim cannonball. This combo worked so nicely an hour ago, but was harshly denied here.

Ultimately, Jameson makes good use of Bell’s Aqua Net, giving Bell the pin on a pedigree to Bates. Bell and Jameson were the picture of teamwork; their Lucha Sisters counterparts an uncoordinated mess.

Great storytelling by both teams! Unfortunately no re-match in the works, as Yim tells Bates in no uncertain terms that “she is holding her back,” and “the Lucha Sisters are history.” Well it was great while it lasted! All hail your new champs; after all they are Better Than You!

SHINE Championship Match: Santana versus Taylor Made (with April Hunter and SoCal Val)

What an amazing main event, one by the always pitch perfect Santana and a highly skilled Taylor Made. These two bounced off each other beautifully, quickening the pace before settling into a grappling game of chess. Best moment for me was Santana’s handspring elbow to running bulldog combo. Now that’s how it’s done! Let’s see any of the guys on WWE pull that off half as well!

Taylor Made came back with some great lock holds, abdominal stretches and a flurry of kicks to Santana’s mid-section. However, Taylor Made looked done for following this physically challenging flurry. Santana seized upon the opportunity, attempting another handspring.

But hold up there! Val distracting the referee allowed Taylor Made to pull on her brass knuckles (yup this lady was packing!) and KO Santana. The crowd looked legitimately shocked as the combined stable of Valkyrie and Valifornia gathered in the ring to celebrate as champions.

Another great Shine with a lot of life lessons. When Heels stick together and work as a team, they are unbeatable! Damn it’s good to be a gangsta’!