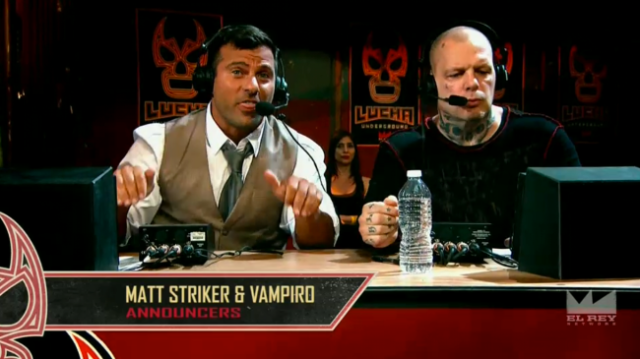 Some people take their pro wrestling announcers way too seriously; I’m not one of those individuals. I will, however, express significant eye rolling in uncomfortable product selling, pervert statements, childish antics (for grown men/women) emanating from these individuals. We all know who I’m talking about.

With this being said, there are significant gems in the pro wrestling announcer community. Ring of Honor’s Kevin Kelly and Steve Corino immediately come to mind, two individuals who both embrace the ROH storylines and community. Ditto for WWN’s Trevin Adams and Rob Naylor: their enthusiasm for its promotions and athletes are contagious. Finally, Vampiro and Matt Stryker take pride in celebrating wrestling’s illustrious past during Lucha Underground broadcasts.

One thing, however, that gets my blood boiling is when announcers embrace – almost celebrate – injury in professional wrestling. Look, we all know that pro wrestling is the art of storytelling through simulated fighting. Still, when announcers gleefully cheer for seeming knockouts (“he’s out!”), missed spots (via slow motion replays) and/or bleeding (“he’s really opened up!”)…this is shameful.

The above is not an attempt to be preachy. Rather, an educational point for promotions and announce talent to adopt a different protocol for when such things occur. Also encourage athletes to sell kayfabe injuries in a manner that doesn’t resemble its very serious counterparts.