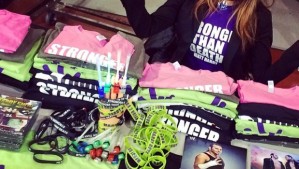 The merchandise (“merch”) table is a staple of every wrestling experience. Whether at a WWE pay-per-view extravaganza or a tiny independent promotion, your night is not complete without a trip to the “merch” area. What you will find certainly depends on the event, but it involves a lot more than just the exchange of funds.

My goal is not to write about the ridiculous items sometimes peddled by wrestling promotions, anything from texting gloves to baby bibs.  There is already an excellent website that chronicles these somewhat notorious products. I highly recommend you look at it for a good laugh (http://wrestlingonearth.com/category/the-merch-table/page/2/).

Instead I’ll share three of my experiences at the merchandising area including a: 1) an NXT house show, 2) an out-of-state Ring of Honor event, and 3) a local Shine wrestling PPV.

As I’ve written previously, an NXT house show is a lot of fun, their “merch” table unsurprisingly equally entertaining. It features a plethora of apparel, signed photographs and cosplay items.  Approaching an NXT merchandising table is a rather low drama affair: one simply looks at the items on display…all of which fit on a simple, 6′ x 30” fold-out table. One can’t help but think of other uses for this table, however (Dean Ambrose and Bray Wyatt come to mind).

Sales folk are typically very helpful, and really seem to know their product.  Often I’ve heard them suggest other items ,or allow a quick try-on to help costumers make a decision. My one complaint would be the lack of women’s items. Being 5’2” and 110 pounds, I’ve never  actually bought anything at an NXT house show as none of it would fit.  Apparently WWE assumes that all wrestling fans are male, while this Y chromosome challenged individual begs to differ.

Ring of Honor is a different merchandising experience all-together.  While their table is similarly very small, salespeople all seem to be ROH “super-fans” exuding extreme passion for their product. I clearly remember one saleslady kindly reminding me that buying a Michael Elgin shirt “is somewhat frowned upon” while an AJ Styles shirt “would be much more celebrated.”  You’ve got to love a salesperson who knows her heel/babyface alignment! In addition, they let me check out tons of sizes to find a good fit for The Intercontintental Belt.  Similar to WWE, I would complain about the lack of women’s anything.  ROH actually only makes two shirts in women’s sizes!  Really ROH, did you not notice the female members in your audience…or did you simply forget that we are 51% of the population? That’s a lot of purchasing power you are missing out on.

Finally, the local wrestling promotion “merch” table is so different…it’s almost an alternate reality.  At Shine wrestling -much like many other independent promotions – you will actually be purchasing your items from the wrestler themselves.  This adds a whole other layer of intrigue to your simple exchange of funds.  And at Shine wrestling, women’s sizes are logically readily available.

At this or any other “indie” show, I suddenly start feeling awkward even approaching the table. While I want to thank the wrestler for their amazing display and buy some of their items: I don’t want to come off as a creep or a stalker.

The experience is awkward, weird and rewarding because it’s real. It gives the fans a chance to say ‘thank you’ for risking your life to entertain me.  At least I can buy your shirt and let you know what your work means to me.  And I think it gives the wrestlers a chance to step out of their kayfabe and get to know their fan base: a group to which they once belonged in another time.