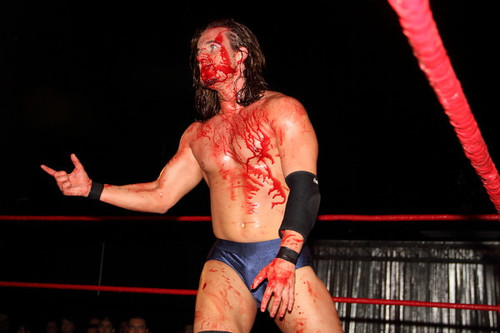 Live events, however, are a completely different story.

At a WWE dark match, Huracanrana and I watched Cena and Bray Wyatt miss a mark…and badly…on a turnbuckle splash. What resulted was a Cena knee to Wyatt chin, and hard. Wyatt ended up vomiting in the middle of ring…then outside of it. Cena slightly bloodied and dazed. Obviously a minor concussion for both, but one never seen by the masses. As could be expected, both finished the match…and the crowd didn’t think anything of it.

Enter San Antonio. Kyle O’Reilly split his head open at Show 1 of a Ring of Honor taping, one featuring 4 consecutive shows. The infamous ‘fuzzy block’ emerged, one needed to obfuscate O’Reilly’s sizable cut and bleeding for cable television audiences. Still – and having to tell a story intended for months of television viewership – O’Reilly came out for subsequent matches sporting a bandage headband…pretending it a lingering injury. By the final taped show, the infamous headband was a nuisance and in-match gimmick. Television viewers would think this kayfabe, not knowing the injury occurred literally 1.5 hours earlier as a bloody mess.

A recent Tampa Full Impact Pro event’s ‘no hold barred’ match saw Teddy Stigma’s head turn into a red fountain via barbed wire on a stick. So much so, that a half dozen bottles of peroxide and help came in from everywhere to clean the ring, floors, and surrounding chairs. Let alone the terrific assistance to Stigma. I had to advise another ringside fan to soap/water clean splattered blood drops from his arm…preceded by signaling an FIP representative to spray the fan’s  arm with disinfectant. Even SoCalVal couldn’t hide her realization of how wet the ring was (in the following match) from the Peroxide: Blood mixture.

These dramatic instances aside, only the most astute – or perhaps curious – live event viewer is aware just how safe and professional pro wrestling athletes are. WWE, RoH and FIP handled the above like champs…both from a biohazard and fan interaction experience. Cool, calm and collected. Let alone the athletes, all with the wherewithall to let help come. Also – and in all instances – finish the match as if everything unfolded as planned.

What is most incredible, however, is how many accidents don’t happen, due to pro wrestler safety acumen. Adjustments by athletes the target of an aerial assault, ones stealthfully moving to catch opponents short of their mark. A little more oomph on a jump/flip to compensate for a missed counter. Moving three feet right/left to grab athletes unintentionally hitting ropes when leaping to attack outside the ring. Cradling a neck on an awkward bodyslam. Abandoning failed moves before they get worse.

To be honest, this is the pro wrestling I’m often watching, micro-focused on the art of perfect technique, also those skilled enough to adjust for it. Perhaps the most incredible part of this? If you’re not looking for it, you’ll never see it. Pro wrestlers simply mesh these safety procedures – as do referees/talent around them – into match happenstance.