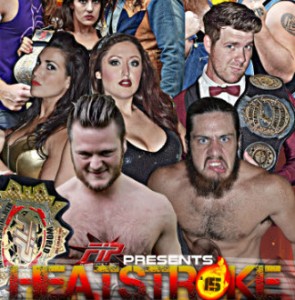 Full Impact Pro (FIP) took over the Orpheum at Ybor City Friday night leaving shattered alliances, chairs, bottles, and faces in it’s wake. This was one “bloody” good night of wrestling book-ended with an ode to the fallen rebel, Rowdy Piper, and a perfect feud between two young insurrectionists, Trevor Lee and Caleb Konley.  FIP was on the warpath.

Tag Team Match
Nuclear Kaasarole (Chase Brown & Peter Kaasa) defeated Flying Solo (Jason Cade & Aaron Solow). What a way to kick off FIP with two teams that looked like they were born to wrestle together in a match that seemed like it was going at triple speed. If this had been any other promotion, these guys would have been the entree not the appetizers. But their placement is just a sign of how much talent currently resides at FIP.  Despite their ridiculous name and looking like rejects from a 1980’s fitness video, Nuclear Kaasarole are an amazing tag team of world class wrestlers. Somewhere in between Kaasa’s corkscrew dive and Brown’s northern lights suplex it hit me just how amazing these guys were, going move for move with the ridiculously fast paced and coordinated Flying Solo.  Solow, fresh from his NXT face-time, looked especially confident and fluid with some wonderful reversals and transitions, including a blocked tombstone attempt into a tag in and quick boot to the face by Cade. Cade then went on quite the rampage, clearing the ring with a beautiful missle drop kick and suicide dive.  Alas, Kaasarole struck last hitting back to back high risk moves on Solow and Cade leaving them stunned and angry.  Both blamed each other for the loss and Cade stormed away without his partner. It looks like this may be the end of Flying Solo, perhaps their name was a give away all along!

Trailer Park Nation Challenge Match
Gary Jay defeated Zane Riley (w/Earl Cooter). The unshakeable Gary Jay in another hoss match with a man 3 times his size, but Jay wouldn’t want it any other way. Zane Riley and Earl Cooter’s bro-mance was on the rocks before this match started, as we are introduced to the latest member of trailer park nation, Veronica Vox. Vox and Cooter are in redneck love (disgustingly making out on the side of the ring for the entire match) and this has Riley feeling abandoned and ready to fall victim to the lanky Jay.  Jay looked great embracing his rising popularity with “ginger chops” galore.  What is a ginger chop, you might ask?  Well my poor writing skills can hardly do it justice, but it basically involves severe damage to the pecs region. Both wrestlers worked the apron solidly with Jay slamming Zane’s head through the ropes, followed by Zane countering Jay’s huracanrana to set up the big man cannonball.  It’s hard to imagine such a mixed pair having so much chemistry together but these two did.  I’m ready for a re-match!

Trailer Park Nation Challenge Match
Bolt Brady defeated Earl Cooter (w/Zane Riley). On top of his stellar kayfabe, Cooter is also a terrific wrestler mixing nicely with the young superstar in the making, Bolt Brady. While Bolt kept trying to take to the sky, Cooter kept him grounded mixing in a variety of suplexes, slams and back-breakers. However, Brady couldn’t be grounded for long driving Cooter off the apron and onto the floor. After thwarting Cooter nicely with his one foot on the rope save, Brady capitalized on the ire between Riley, Cooter and Vox for the win. There is nothing like the wrath of a bro-mance scorned!

FIP Florida Heritage Championship Match
Maxwell Chicago (c) defeated Jonny Vandal (w/Trina Michaels). Jonny Vandal and Trina Michaels turned up the creepy factor to 100%, taunting and teasing young Maxwell with their sexual chemistry.  This made for some fun “PG-13 rated” story telling that most likely can be interpreted on several levels.  My overall take was don’t bother punching Jonny Vandal because likely he enjoys it too much. Vandal punished Chicago from the get-go with some skilled ground and pound featuring several nicely executed suplexes, slams and chin locks.  While Chicago’s punches and chops, had seemingly no effect on the masochistic Vandal. Finally, some miscues between Michaels and Vandal gave Chicago his opening leading to a well timed super kick to the face.  Of course, Vandal wasn’t going to lose graciously. Several minutes and one microphone later, and the crowd was treated to the amplified sound of our champion’s nose, chin and forehead being pummeled. You’ve gotta love a sore loser especially one eager to remind us that he’s the one getting laid tonight.

Singles Match
Martin Stone (w/Mister Saint Laurent) defeated Blake Edward Belakus.  Ah, the governor of FIP was in rare form dismembering “the apex” with several headbutts, one gorgeous Euro uppercut and punches and chops galore. Of course Belakus did not go down lightly countering Stone with a wonderful back elbow to knee to suplex combo.  My favorite moments was Belakus’ enzuigiri to Stone’s head followed by a decapitating lariat.  Of course MSL does his part distracting the apex just in time for Stone to DDT him to oblivion.  Stone then announces his is deserving of a title shot, and I have to agree, let’s see some gold on the governor FIP!

Singles Match
Deimos defeated Josh Hess (w/Mister Saint Laurent). This was a quick but fun squash match between two former MSL tag team partners, continuing the theme of the night of relationship breakdowns. Alliances end hard in FIP, and Hess let Deimos know he was “the best partner he ever had.”  This point is likely debatable as Deimos quickly ended Hess with a brutal spine-buster spear combo.  The aptly named Deimos then sent a message to MSL that he is not to be trifled with and all will be held accountable.

Singles Match
Monster Tarver (w/Mister Saint Laurent) defeated Rhett Giddins. This was my favorite match of the night with the inspired story telling and ring work of Tarver and Giddins front and center.  The Freak was out for blood and initially had Monster on the run delivering brutal clotheslines, boots to the head and punishing leg sweeps whenever Monster dared to stand upright. But Monster wasn’t going to let his lesson go unheard.  He was determined to teach the Freak the brutality of pro-wrestling and the fickle nature of his adoring fan-base. Monster took the war outside of the ring showering the Freak in chairs up on the stage and likely bending Freak’s knee backwards a few times in the bout. Giddens of course isn’t buying Tarver’s brand of caring spitting in his face as Tarver suplexed him to the floor. This match saw me lose my chair and my usual cool detachment, as I was left feeling like the young kids yelling loudly for Tarver to “leave him alone!”  A wonderful display of how indie wrestling can tell a complex and heartbreaking story.   I’m ready for part 3 to this match, the resurrection and redemption of Giddens!

No DQ Match For The FIP Tag Team Championships
The Hooligans (Devin Cutter & Mason Cutter) defeated The Savages (Eddie Graves & Teddy Stigma) (w/Trina Michaels) to become the new Tag Team Champions.  Wow what a match…this was just flat out fun and flat out brutal. The loveable barefooted Hooligans versus the devious Savages made for complete and total mayhem in which both teams used basically every part of the Orpheum to brutalize each other. Trina and her barbed wire 2 X 4 declared the match a no DQ affair and this lead to the ensuing classic bar fight featuring glass, millions of chairs, thumbs to the eye, a sit down slap fest and of course barbed wire to the face.  Ultimately the Savages turned on each other leaving Vandal to rescue his lady love and Teddy cut open.  Lots of blood and guts later and myself and The Intercontinental Belt were left showered in fluids and reaching for the disinfectant. Now that’s extreme!

FIP World Heavyweight Championship Match
Caleb Konley (w/Andrea & So Cal Val) (c) defeated Trevor Lee. These two guys must be mind readers or separated twins, as this match was a perfectly choreographed dance of death.  Lee came out swinging almost taking down Konley in the first few minutes.  Of course, Konley has the lovely but deadly Andrea in his corner and Lee was left fending off both of them.  My favorite sequence involved Lee hitting his spinning elbow but getting caught by Konley’s beautiful power bomb.  This led to Andrea holding down the battered Lee only to be countered by Lee’s savior Mr. All Night Long.  Swann then whipped the crowd into a frenzy adding new life into Lee’s assault and we were treated to an amazing belly to belly suplex on the stunned champion. Both wrestlers worked the apron and turnbuckles seemingly evenly matched for the next few minutes in an endless array of punches, elbows and forearms.  Ultimately, Konley would gain an advantage following Lee’s tornado DDT in the form of back to back cradle shocks. This match left me somewhat mind blown and realizing how lucky I am to see this level of talent and skill on a semi regular basis.

FIP Heatstroke delivered and then some teaching me that good friends are hard to near impossible to find and no good dead will go unpunished! Four signs and fours hours later this mark can only conclude that FIP is absolutely the best night of entertainment one can purchase for $25.  To be honest, they could charge me twice that much and I’d still say the same thing.