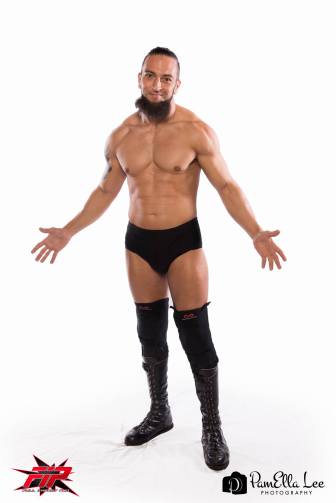 The thing about Jonny Vandal is he’s been so good…for so long…and in so many ways…one almost takes it for granted. I did a double take in realizing there wasn’t already an ‘Athlete Appreciation’ on WrestlingInFlorida.com dedicated to this terrific talent. We first spoke of Vandal last August as one of five indy wrestlers you need to know.

For those of us living in Central/West/South Florida, Jonny Vandal is a mainstay on almost every WWN promotion. He’s fought for nearly every title the promotion has, with his first foray in defeat via the outstanding Caleb Konley (in 2010, now with TNA Impact). Not a bad way to make a first impression!

Still – and as impressive and occasionally disturbing this entrance is – it’s Vandal’s commitment to his craft that is his calling card. The man is a powerful dynamo, an incredibly strong and agile athlete at 5’8’’, 185 pounds. He’s explosive both off the ropes and in traditional grappling.

Importantly, Jonny Vandal is the rare independent wrestler who can adapt to literally any competitor, thus the ‘golden goose’ of promotions who makes every opponent better. It’s not surprising NXT‘s featured him on multiple occasions (as Jonathan Ortagun).

Moreover, Vandal’s non-verbals and facial expressions are pitch perfect. The A+ heel, Vandal sells a solid performance of infuriating other wrestlers while simultaneously insulting a crowd begrudgingly respectful of someone they are supposed to hate. Insult wars never end well for the brave opponent or fan.

Moreover, I remain continuously impressed by Vandal’s continued growth…even after 15 years of ring time. Not a match goes by where a new move isn’t unleashed within his arsenal. I verified this as deliberate, chatting with Vandal before/after matches about said point. He literally takes pride in being different each time. It’s a trait shared by a similar solid talent in Full Impact Pro’s Jason Cade.

Related, Vandal’s ability to maximize pacing and both Michaels and the referee (usually the stellar Frank Gastineau) ensures a constant staccato yet fluid rhythm. This rhythm is a wonderful storytelling mechanism, chapters told via Vandal’s strike sequences plus interaction with supporting entities. Time flies by fast in a Jonny Vandal match.

Finally, it’s near impossible not to appreciate Jonny Vandal, the person. We’ve been asked several times (by fans and talent) how we choose individuals for this feature, and it always comes down to the athlete as a human being. Vandal is always classy and humble, makes time for his supporters, and truly loves what he does. You’d be hard pressed to find a nicer person, let alone professional wrestler.