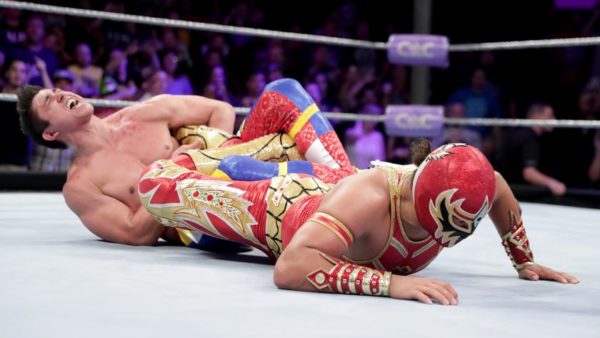 With the first WWE Cruiserweight Classic in the books – congratulations again to T. J. Perkins and the rest of the stellar 32-man lineup! – now is as good time as any to frame the whole event within a wider global wrestling lens.

To begin, it’s almost unfathomable to assemble such a diverse, global roster from an array of promotions, featuring both young and veteran talents. This is not to disparage other global-friendly events. Evolve Wrestling, for instance, arguably has this market cornered in the confines of Florida and beyond.

Rather, these global-focused events are typically dominated by a host country and for good reason. It’s expensive to get there, lodge, and finally pay the talent. To make it worth an athlete’s time, s/he must be able to book for several weeks and across multiple promotions. Adam Brooks, who we focused on a little while back, was able to parlay his maiden wrestling voyage to the States into a penultimate match with Colt Cabana. (You go on with your bad self, Brooksy.)

Thus, the Cruiserweight Classic served as a valuable reminder that the world’s wrestling superstars are not limited to the I-4 off Orlando, Florida. Many are literally around the corner from you, in independent promotions most don’t even know occur almost every weekend. In Tampa, the aforementioned Evolve, Full Impact Pro, and Shine Wrestling regularly frequent a small-ish bar in the Ybor City district. Even those who’ve lived in the city for years have no idea these events occur almost weekly. As a reference point: Perkins, Rich Swann, Drew Gulak, Zach Sabre Jr., Johnny Gargano, Tomasso Ciampa, Lince Dorado, Tony Nese and Cedric Alexander all appeared in-ring at Ybor City over the past 1-2 years. Let alone reserves like Jonny Vandal, a favorite of the site.

Moreover – and for those to whom the Cruiserweight Classic the first exposure to non-WWE style wrestling, many were likely flabbergasted by the incredible array of movesets these athletes were able to unleash seemingly at will. With no disrespect to bigger brother, these match types are – once again – nothing new to higher tier independent wrestling promotions.

To explain and as many know, the WWE will deliberately slow down matches to coincide with camera movements and commercials, the result a very scripted match beautifully told via audio-visuals. We discussed this as well in an earlier column, how a live WWE event can be considered multiple events at once, depending on audience perspective.

Per above, each promotion (WWE, Ring of Honor, New Japan, Evolve, etc.) features a calling card. For the WWE, their live presentation is second to none. Other promotions emphasize comedy, some Strong Style. There are tag team or extreme-centric ones, lucha libre, submission-centric, also family friendly offerings. Still – and as an educational point – the Cruiserweight Classic was, in reality – simply bringing all of these terrific styles into a WWE presentation. Most importantly, these were done without reducing movesets or altering pace to coincide with WWE norms. It will be interesting to see how much leeway these athletes are given once featured on live, global programming to WWE audiences.

There’s also a very ugly side to the Cruiserweight Classic that I would be remiss in not discussing. Quite frankly – and combined with NXT’s recent push to infuse local talent into shows – the brass ring of a full time, WWE contract tore apart several independent, local promotions. I speak from direct experience, after several unsolicited and very frank conversations with top talent a slave to booking whims and/or unfulfilled promises.

I don’t blame independent promotions for partnering with the WWE and/or like global brands. Still, this partnership forges unrealistic expectations for talent chasing a goal that – in nearly all instances – leaves them with a non-guaranteed contract while alienated from peers in former promotions. For athletes toiling away for up to a decade hoping for a break, the promise of riches at a bank with I.O.U’s…given to someone else, no less…can be devastating. As with any profession, sometimes the most deserving and/or talented are left out in the cold.

Moreover, indy promotions pay a hefty price in allowing their rosters to thin out via partnerships. Shows like in Ybor City become decimated, and the product suffers. In Florida and now in the wake of the Cruiserweight Classic, most NXT signings for the next year completed, and TNA investing in select, higher profile independent talent, the prodigal sons and daughters are returning.

This return is not bittersweet. They’re now tasked with rebuilding promotions and local fan confidence after several months of severe shakeup. Several of these individuals literally walked away from the profession entirely, and now come back to it as changed men and women. Independent wrestling may no longer be a career, but it is now a passion they are at peace with. For younger talent seemingly on a meteoric rise but left off the main stage, they now realize the pro wrestling journey a very long one. Rewards may not come for another 5 years, minimum.

This is not all doom and gloom, however. The Cruiserweight Classic proved partnerships do work, even with non-guaranteed contracts, and featuring top global talent. There is a new openness in the independent wrestling community to encourage industry/regional success, and with it protect the interests of their athletes and fans. More athletes are keeping their names and brand via such partnerships, and with it protecting revenue streams. Few are getting rich wrestling; these streams are therefore invaluable.

The moral of the story: there’s a Cruiserweight Classic almost every weekend in your city. Likely even two. Support these promotions and athletes, with proceeds going much further to keep them doing what they and you love. The WWE Cruiserweight Division will simultaneously serve as a valuable, weekly reminder of hundreds of top independent wrestling talent waiting to be unleashed on the global masses.